From Open-IOV
Jump to navigation Jump to search

This page will detail the internals of various GPU drivers for use with I/O Virtualization.

An absence of critical technical documentation has historically slowed growth and adoption of developer ecosystems for GPU virtualization.

This CC-BY-4.0 licensed content can either be used with attribution, or used as inspiration for new documentation, created by GPU vendors for public commercial distribution as developer documentation.

Where possible, this documentation will clearly label dates and versions of observed-but-not-guaranteed behaviour vs. vendor-documented stable interfaces/behaviour with guarantees of forward or backward compatibility.

This article will aim to provide information about the following details of GPU drivers:

This section will detail high level architectures of each driver.

This section will cover how the GPU's embedded components, the GPU driver, and virtualization functions are initialized.

This section will detail how the device schedules instructions for execution.

This will attempt to provide a comprehensive view of scheduling from virtualized processes down to execution within the device.

The In-VM Scheduling section will detail how instructions scheduled within the virtual machine's GPU device driver.

The Firmware Scheduling section will cover the GPU's internal scheduling model if a deferred execution pathway is used (like i915's GuC or OpenRM's GSP).

In the case an intermediate scheduling microcontroller is not used this section may be less applicable (ie: vExeclist scheduling under Intel vGPUs).

The Memory Management section will cover how the GPU driver manages memory for virtual GPUs and host processes.

The Display Surface Virtualization section will detail how virtual displays are provided to guests and/or graphics rendering buffers (pixel surfaces) are shared from guest to host if such functions are provided via the driver.

This section will cover methods provided by the GPU driver suitable for high performance graphics sharing.

This section is supported by significant contributions in open source by Zhi Wang, Ben Widawsky, and Igor Bogdanov.

Processes which make use of the Intel i915 driver receive an i915 Client ID.

During initialization of the i915 driver the GuC binary blob is offloaded into the Graphics Translation Table (GTT). This allows the GuC to read GTT-loaded binary blob from shared framebuffer memory so that it may boot. 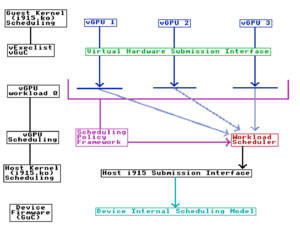 There are several abstractions for GPU virtual machine scheduling. Those are as follows:

The vExeclist is a method to submit commands directly to the GPU without the use of an intermediate microcontroller.

vGuC is a command submission interface used to process commands to the Intel Graphics Microcontroller (GuC). 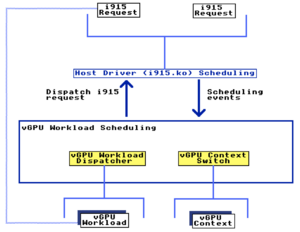 Execlist executes commands synchronously on the device without an intermediate microcontroller. This is the preferred method of executing commands by some driver developers because of it's stability and transparency under current i915 development. 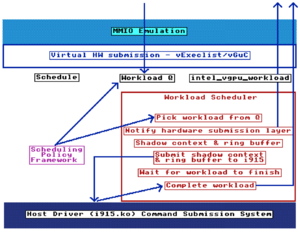 Process-specific memory buffers are stored inside a Per Process Graphics Translation Table or PPGTT. This is a GPU MMU translated subregion or IOVA of global GPU memory specific to a GPU process's client ID.

The Intel vGPU makes use of two modes for Display Surface Virtualization.

Intel's IDD can be found in their Display Virtualization for Windows OS repository.

Intel's i915 driver provides functionality to directly map display memory from a guest vGPU Virtual Function (either SR-IOV or VFIO-Mdev) into the host GPU's Physical Function without slow memory copies or graphics compression. For users running GPU virtualization on their local device this results in a significant performance uplift compared to traditional graphics sharing functionality built for remote access use-cases such as VDI.

Intel's 0copy display virtualization tools are simple to implement as sharing does not rely upon an added IVSHMEM (Inter-VM Shared Memory device) - rather the host directly maps the guest's display memory via udmabuf as the buffer sharing functions are provided within the i915 open source driver. 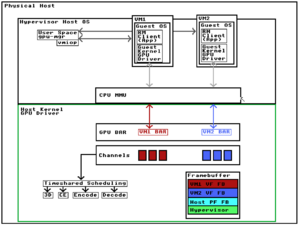 The Open Resource Manager (RM driver) makes use of a highly object oriented paradigm comprised of multiple "engines" which act as micro-services for servicing driver requests.

The Platform RM is loaded into the Linux Kernel as nvidia.ko. This module communicates with the GSP RM for via Remote Procedure Calls (RPCs) to communicate with engines from the RM Core.

Processes (local, remote, or virtualized) which make use of the RM driver receive an RM Client ID.

The RM Server (or Resource Server) tracks RM Clients as well as the hardware and software resources they control, allocate, and free.

During bring up of the hardware several binary blobs are loaded from embedded Boot ROM memory to bootstrap embedded controller bring up from which point additional software is loaded from onboard SPI flash memory.

Software loaded from SPI flash is necessary for the full initialization of the Falcon/NvRISC processor as well as a cached version of the software necessary to run the GPU System Processor (GSP).

Once the platform is posted it is ready to communicate with the host platform's RM driver. The OpenRM driver offloads a binary blob containing the RM Core to the GPU System Processor (GSP) which is likely to contain a more recent version than the cached version contained in on-board SPI flash.

There are several abstractions for GPU virtual machine scheduling. Those are as follows:

Virtual machines contain their own GPU scheduling within the Nvidia kernel module in the guest OS.

Within a virtual machine running the Nvidia driver messages to the GPU are first sent to the guest nvidia.ko kernel module.

Note: Unclear on execution pathway for pRPCs vs vRPCs. pRPCs may go directly to device.

In addition to scheduling which occurs within the virtual machine the Resource Manager driver also schedules messages to the GPU between GPU-accelerated virtual machines and host processes.

Messages sent by the guest (via vRPC or pRPC) are received by the host Nvidia.ko driver.

After exiting to userspace a daemon process (the gpu-mgr) and a library (libnvidiavgpu.so).

The gpu-mgr is a process which provides the spawning of virtual GPU stubs and population with capability information.

The VMIOP is an SDK (Software Development Kit) provided in binary format split between the libnvidiavgpu.so and nvidia-vgpu-mgr which provides userland helper functions for GPU virtualization.

Messages to the VMIOP are scheduled by Linux kernel niceness (scheduling abstraction).

Messages received by the host RM driver (Resource Manager) are then scheduled by the RM Core contained within the GSP (GPU System Processor). The GSP handles the device's internal scheduling model.

Managing virtual machine memory is very important to the security of virtualization.

This section will cover the method by which secure memory "enclaves" or IO Virtual Addresses (IOVAs) may be provisioned and separation enforced by hardware constructs within the GPU.

In order to create such configurations several abstractions are used to translate high level representations of virtualization programmed via the vmiop and gpu-mgr into practical, architecture specific instructions.

GPU Hardware Abstraction Layers (HALs) contain logic specific to graphics architectures, for instance the precise method by which the GPU driver may interact with the Falcon to provision MMU protected memory.

User programs and VMs have their memory translated through the GMMU.

Once created memory translations within a virtual machine's IO Virtual Address (IOVA) will be protected by the device's GMMU controller.