From Open-IOV
Jump to navigation Jump to search 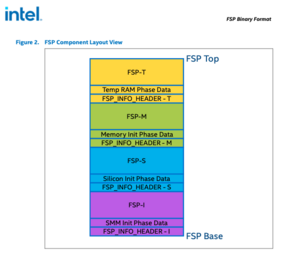 In the context of GPUs the FSP configures several functions of the device.

Those functions are as follows:

The FSP configuration editor can be downloaded here and it's user manual is available here.

The FSP's binary layout is detailed within the Intel® FSP External Architecture Specification v2.4 on page 14.

Some firmware packages may include an **End of Manufacturing Flash Protection Mode** status of Protected or Unprotected.

The following section is supported by igor-blue.github.io (see reference 1, 2):

"The GuC - an embedded i486 core that supports graphics scheduling, power management and firmware attestation."

The following section is supported by igor-blue.github.io (see reference 1, 2):

"The μOS kernel runs in 32-bit protected mode, with no paging and old-style segments model (CS, DS, etc’). All code run in ring0. The OS handles HW/SW exceptions and crashes, and supplies debugging and logging services."

"It runs a single process - which initializes the system and then waits for interrupts/events in a loop."

"The bootrom verifies the firmware with a digital signature using a SHA256 hash + PKCSv2.1 RSA signature, and if the test passes copies it to SRAM and starts executing."

The GPU System Processor (GSP) is an embedded controller used for offload of the RM Core.

The GSP is initialized multiple times during the system's bring up and runtime.

GSP offload may occur during: