This article places emphasis on the Virtual GPU (vGPU) use case however these concepts apply generically to virtualization of I/O devices (TPUs, NICs, storage peripherals, ect..).

This section will cover concepts which apply both to Mdev Mode, SR-IOV Mode & SIOV Mode.

This section is supported by significant contributions in open source by Alex Williamson. 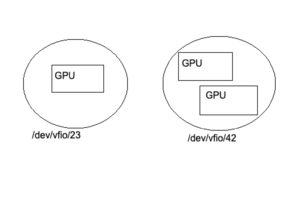 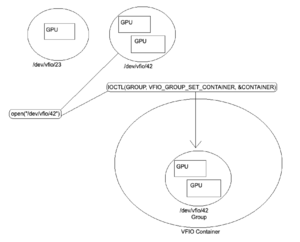 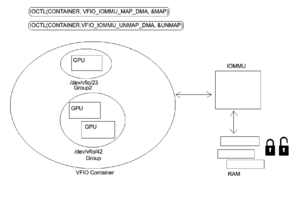 When this has been done IOCTL(CONTAINER, VFIO_SET_IOMMU, VFIO_TYPE1_IOMMU) can then be used to set an IOMMU type for the container which places it in a user interactable state.

Once this IOMMU type state has been set and the VFIO container has been made interactable additional VFIO groups may be added to the container without requiring that the group's IOMMU type be set again as newly added groups automatically inherit the container's IOMMU context.

Figure 3: Once the VFIO Groups have been placed inside the VFIO container and the IOMMU type has been set the user may then map and unmap which will automatically inserts Memory Mapped IO (MMIO) entries into the IOMMU as well as pin/unpin pages as necessary. This can be accomplished using IOCTL(CONTAINER, VFIO_IOMMU_MAP_DMA, &MAP) for map/pin and IOCTL(CONTAINER, VFIO_IOMMU_UNMAP_DMA, &UNMAP) for unmap/unpin.

Getting the VFIO Group File Descriptor

Figure 4: Once the device has been bound to a VFIO driver, set in a VFIO container, the VFIO container has it's IOMMU type set, and a memory map/page pin of the VFIO device has been completed a file descriptor can then be obtained for the device. This file descriptor can be used for interrupts (ioctls), to probe for information about the BAR regions, and configure the IRQs.

VFIO device file descriptors are divided into regions and each region is mapped into a device resource. Region count and info (file offset, allowable access, ect..) can be discovered through interrupt (IOCTL). Each file descriptor region corresponding to a PCI resource is represented as a file offset.

In the case of RPC Mode this structure is emulated whereas in SR-IOV Mode the structure is mapped to a real PCI resource.

Below is what the file offsets looks like internally for each BAR region starting from address 0 and growing with the addition of former regions as you progress through the file.

Guests communicate with the host via VFIO Interrupt Requests (IRQs). These are sent via an irqfd (IRQ File Descriptor). Similarly, the host receives these interrupts via eventfd (Event File Descriptor). The resulting data can be returned via a callback.

The IRQ VFIO_DEVICE_GET_INFO can provide information to distinguish between PCI and platform devices as well as the number of regions and IRQs for a particular device.

Once the interrupt user knows the number of regions within a VFIO device they can use IRQ VFIO_DEVICE_GET_REGION_INFO to probe each region for additional information. This interrupt will return information such as if it can be read from or written to, if the device supports MMAP, as well as what the offset and size of the region is within the VFIO file descriptor.

VFIO_DEVICE_GET_IRQ_INFO is used to retrieve information about a device IRQ.

VFIO_IRQ_INFO_AUTOMASKED is used to mask interrupts when they occur to protect the host.

The upstream API can be read here (vfio.h)

VFIO_DEVICE_SET_IRQS is used to setup IRQs. Actions can be configured such as trigger which is when the device triggers an interrupt (IOCTL), masking and unmasking actions can be set. Bool and None data types are used for loopback testing of the device. Start and index may be used to modify subregions.

Figure 5: Device Decomposure and Recomposure via VFIO. See slides from: [2]

The platform's CPU communicates with the GPU by reading/writing to and from pinned MMIO pages in Random Access Memory (RAM). MMIO pages within the RAM are subject to IO Virtual Address (IOVA) translations by the platform's discrete MMU controller which is programmed by the CPU. These IOVA translations serve as a mechanism to enforce HPA to GPA isolation in the context of the platform.

The GPU core performs virtualized operations by reading/writing to and from shadow page tables in onboard Video Random Access Memory (VRAM). Shadow pages within the VRAM are subject to IO Virtual Address (IOVA) translations by the GPU's discrete GPU MMU controller (GMMU) which is programmed by the Embedded CPU (GPU co-processor). These IOVA translations serve as a mechanism to enforce HPA to GPA isolation in the context of the virtual GPUs.

In the context of VFIO pinned MMIO pages in RAM act as an interface to communicate with VRAM shadow pages allowing GPU drivers on the platform to send instructions to the GPU. When the GPU or Platform alters memory contained in a shadow page or pinned MMIO page the change is mirrored in the corresponding IO Virtual Address (IOVA). For example if shadow page 0 is changed by the GPU this change is mirrored in MMIO page 0 on the platform (the reverse example also applies). When communications occur between the platform and GPU the information first moves through the MMU/GMMU and is then written to RAM/VRAM. 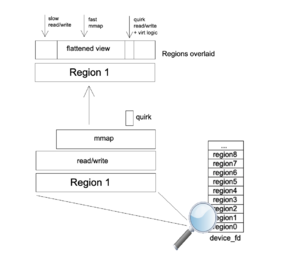 Figure 7: A depiction of region overlays within a VFIO file descriptor. See slides from: [2]

Figure 7: Regions of the PCI BAR require emulation (slow path) via emulated traps (known as quirks). These regions are primarily in PCI configuration space. QEMU may overlap a region overlay which when read/written to/from triggers a VM-exit to trap and emulate the region in order that appropriate translations may occur (such as those concerned with IO Virtual Address - IOVA). 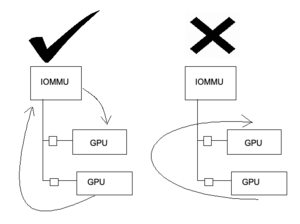 The mediated device framework made 3 major changes to the VFIO driver.

This section will deal with how an Mdev driver is initialized.

Sample mdev code for device initialization can be found here.

Registering VFIO MDEV as a driver

VFIO Mdev must be registered as a driver. This register event occurs between the Mdev Driver Register Interface and the VFIO MDEV interface. 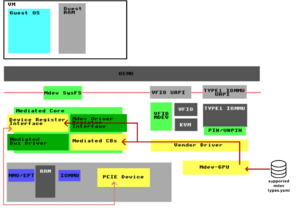 Figure 9: Registering the mediated device. This step may be accomplished via the vendor driver or via GVM/Mdev-GPU for drivers which do not include support for Mdev functionality and/or do not support arbitrary Mdev types.

Figure 9: The vendor driver must register with the Mediated Core's Device Register Interface. The example shown uses the GVM Project's Mdev-GPU component to accomplish this step on behalf of the vendor driver.

Figure 9: The vendor driver must now register Mediated Callbacks which it expects to receive from Mdev devices. The example shown uses the GVM Project's Mdev-GPU component to accomplish this step on behalf of the vendor driver. 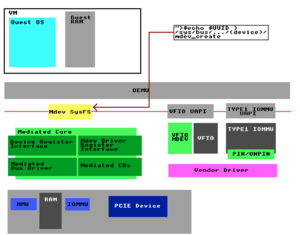 Figure 10: Echoing a UUID into the mdev-sysfsdev API. This functionality is included in mdevctl and in LibVF.IO. See slides from: [1]

Figure 10: The user of an mdev capable device driver may echo values such as a UUID into the mdev-sysfsdev interface to create a unique mediated device. UUIDs must be unique per mdev device within a host. 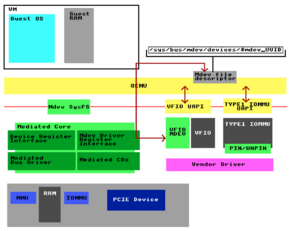 Figure 11: When starting a QEMU process with a VFIO-mdev attached QEMU calls the VFIO API to add the VFIO device to an IOMMU container/group. QEMU then runs the IOCTL to obtain a file descriptor for the device. 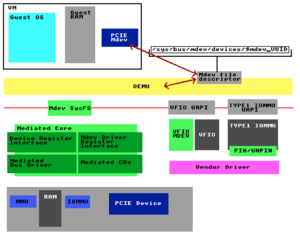 Figure 12: Once QEMU has obtained the VFIO file descriptor for the Mdev device via IOCTL it is then QEMU's job to present the file descriptor into the virtual machine so that the mdev may be used by the guest. 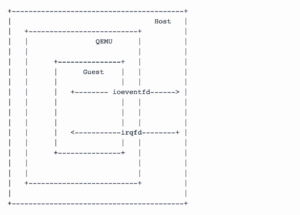 Figure 13: A simple diagram of signalling from host to guest (via irqfd) & guest to host (via ioeventfd) From blog.allenx

Figure 13: RPC Mode moves instruction information across a virtual function (VF) device using Remote Procedure Calls generally by way of software interrupt (IOCTL). Signals to and from the guest and the host GPU driver may be passed over file descriptors such as the Interrupt Request File Descriptor (irqfd) and IO Event File Descriptor (ioeventfd). The irqfd may be used to signal from the host into the guest whereas the ioeventfd may be used to signal from the guest into the host. Guest GPU instructions passed from the guest as Remote Procedure Calls are Just-in-time recompiled on the host for execution by a device driver.

Interrupt Requests (IRQs) must be remapped (trapped for virtualized execution) to protect the host from sensitive instructions which may affect global memory state.

Emulated memory regions use indirect emulated communication requiring a VM-exit (slow). These regions are often used for virtual PCI config space such as in this sample code. 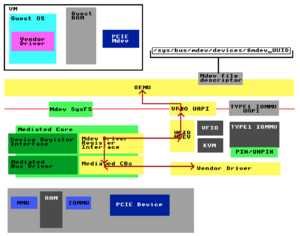 Figure 14: QEMU gets region info via VFIO UAPI from vendor driver through vfio-mdev and Mediated CBs. See slides from: [1]

Figure 14: QEMU gets region information via VFIO User API (UAPI) from the vendor driver through VFIO-mdev and Mediated Callbacks. 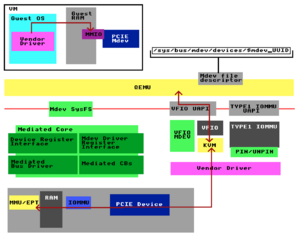 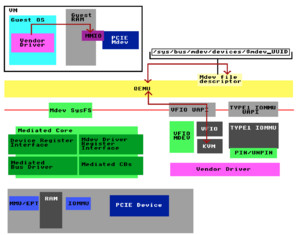 Guest Memory Mapped IO (MMIO) trips Extended Page Table (EPT) violations which are trapped by the host MMU. KVM services EPT violations and forwards to QEMU VFIO PCI driver. QEMU then converts the request from KVM to R/W access to the Mdev File Descriptor (FD). Reads and writes are then handled by the host GPU device driver via mediated callbacks (CBs) and VFIO-mdev.

Because memory is not statically allocated by the vendor driver under the mediated device framework there is no requirement to make use of traditional VFIO pinned pages (via the vfio-pci module) rather MMIO memory can be mapped at runtime incrementally. As a result non-standard mediated device vfio stub modules may be used. 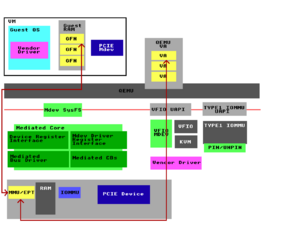 Figure 19: QEMU calls VFIO_DMA_MAP via Memory listener. (not just guest physical memory but also device memory will be added through this memory listener) 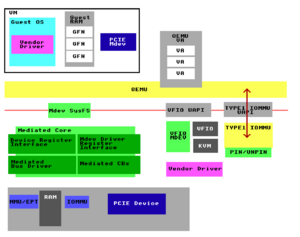 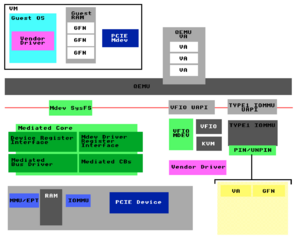 Scheduling is handled by the host mdev driver.

Kernel documentation used for implementing a VFIO Mediated Device may be found at kernel.org.

Sample code for various mdev implementations may be found below:

When the make operation has been completed successfully the directory will now contain .ko files. These files are the binary kernel modules.

Now that you have compiled the kernel modules you may load them via the insmod command.

For example to load the mtty.ko module run the following command from within the directory where you built the modules:

To unload any of the kernel modules you may make use of the rmmod command.

For example to unload the mtty.ko module run the following command:

An additional guide explaining how to make use of the mtty.c sample code may be found at line 308 of the kernel.org VFIO Mediated Device documentation.

SR-IOV communicates instructions from a virtual function (VF) directly to the PCI BAR.

Guests are presenting with passthrough memory regions by the device firmware.

Scheduling may be handled by the host mdev driver and/or the device firmware.

Revision 1.0 of the SIOV specification can be read on the Open Compute Project website.

SIOV makes use of Shared Hardware Workqueues which may be accessed by processes or Virtual Machines.

According to kernel.org: "In order to allow the hardware to distinguish the context for which work is being executed in the hardware by SWQ interface, SIOV uses Process Address Space ID (PASID), which is a 20-bit number defined by the PCIe SIG. PASID value is encoded in all transactions from the device. This allows the IOMMU to track I/O on a per-PASID granularity in addition to using the PCIe Resource Identifier (RID) which is the Bus/Device/Function."